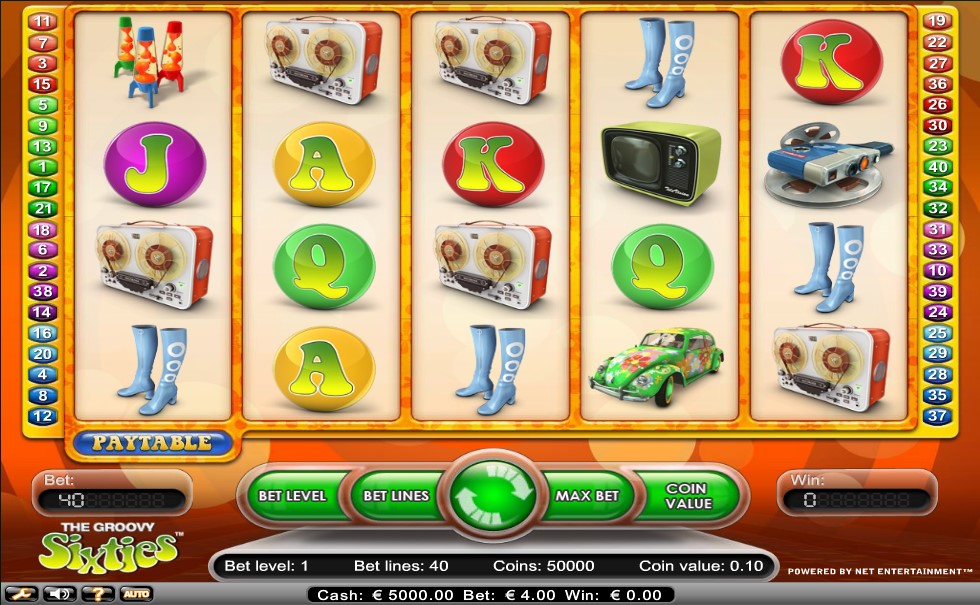 Groovy Sixties is part of the Decade series comprised of three pokies: this one, Funky Seventies and Super Eighties, each devoted to the related decade of the 20th century. It’s not features that make the pokie stand out because it has only two bonuses: Stacked wilds and free spins. But the game does make a difference thanks to its exceptional atmosphere of the 60s.

There are 5 reels, 4 rows and 40 variable paylines in the game. Low-win symbols are common playing cards from J through A and they are designed as colored balls. Themed symbols are more interesting because they are culturally charged and evoke the powerful feeling of nostalgia in people who have memories of those times. Young gamers born much later than the 60s may find the pokie interesting as well because it is fully devoted to the breakthrough times that gave birth to hundreds of iconic things and phenomena such as muscle cars, the hippie movement, psychedelic tie-dyed shirts, the Beatles, and so on.

Medium- and high-ranking symbols include authentic lava lamps (x150), high rubber boots (x150), a vintage movie camera (x250), a reel-to-reel audio tape recorder (x250), an old-fashioned television (x400) and a Volkswagen Beetle (x400). You need to get three or more of these symbols to get an award. In real money terms, the maximum payout for regular symbols is $1000.

You can change the bet after each spin by adjusting a coin value from $0.01 to $0.50 and the number of coins from 1 to 5. So the minimum and maximum stakes are $0.40 and $100 per spin. The number of lines is changeable as well but there can hardly be any reason for someone to deactivate paylines because this causes the pokie’s RTP to lower down, too.

The 60s Wild is a substitution symbol that comes with an extra bonus to it. Its primary function is to act as a joker card, replacing other symbols and helping them form combinations. Wilds are arranged in groups of 4 continuous symbols and when the reels stop, they can be visible partially or even fully on a reel. Stacked wilds give you the chance to bump up your winnings, not least considering that the wilds in the pokie are able to create their own combos. Hitting 3 or more wilds on a payline gives you away up to x1000 times the line bet, or $2500, which is the pokie’s first highest jackpot.

A disco dancer is a scatter that pays the total bet times x2 ($200 at max) if three of them appear in any position. Besides, three of them initiate 5 free spins, during which all wins are doubled. If you get 3 more scatters during the feature, you are awarded 5 extra free spins to the remaining ones.

Groovy Sixties unveils the realities of the 1960s by showing lots of items that were typical for those times. Special symbols are a stacked wild and scatter. The latter triggers 5 free spins with all prizes doubled.